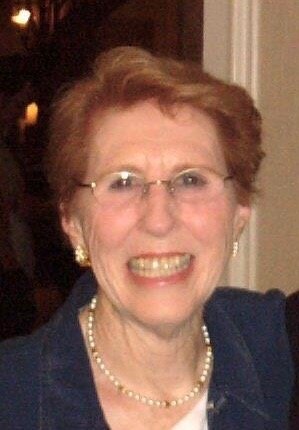 Please share a memory of Genevieve to include in a keepsake book for family and friends.
View Tribute Book

92, a resident of Basking Ridge for over 50 years, taught Mathematics in the Bernards Township School District

Genevieve McCarthy, 92, passed away peacefully on Friday, September 23, 2022, at Fellowship Village in Basking Ridge; she had been a resident of Basking Ridge for 53 years.

Genevieve was born and raised in Dorchester, Massachusetts, a suburb of Boston; she was the third of seven children born to Thomas J. Kennedy, who owned a business in the wool industry, and Genevieve (Duggan) Kennedy.

Genevieve was a 1950 graduate of Emmanuel College, graduating with a degree in Mathematics. After college she was offered a position with the General Electric Company (GE), but chose instead to work for her father, where she was given wide latitude to work in many areas of his business.

She married Charles J. McCarthy, also from Boston, in September 1953; the two moved to Norwood, just outside of Boston.  They began raising their family there, before moving to Merrick, New York; Fairfield, Connecticut; Lenox, Massachusetts, and finally to Basking Ridge, with their six children.

Genevieve led an active life, always full of energy and vigor.  Knowledgeable and well read, she was always searching the internet for where she and Charlie would go on their next cruise or trip to Europe.  She was kind and fun to be with, but also a respected teacher and voice in her 26 years teaching in the Bernards Township School System. Her greatest joy in life however was her family, her husband of almost 70 years and her children and grandchildren.

She is survived by her husband, Charles J. McCarthy, sisters Maureen Leahy and Rosemary Manning, sons Kevin and his wife Linda, Richard and his wife Suzhen, Michael and his wife Ana, David and his wife Kathy, Brian and his wife Annu, daughter Kathleen, grandchildren Shannon, Megan, Ryan, Kevin, Kaitlin, Andrew, Christopher, Thomas, Alissa, and Zoe, and great grandchildren Thomas, Olivia, and Cameron.  She was preceded in death by her grandson, LT Sean McCarthy.

To send flowers to the family or plant a tree in memory of Genevieve McCarthy, please visit Tribute Store
Wednesday
28
September

Look inside to read what others have shared
Family and friends are coming together online to create a special keepsake. Every memory left on the online obituary will be automatically included in this book.
View Tribute Book
Share Your Memory of
Genevieve
Upload Your Memory View All Memories
Be the first to upload a memory!
Share A Memory
Send Flowers