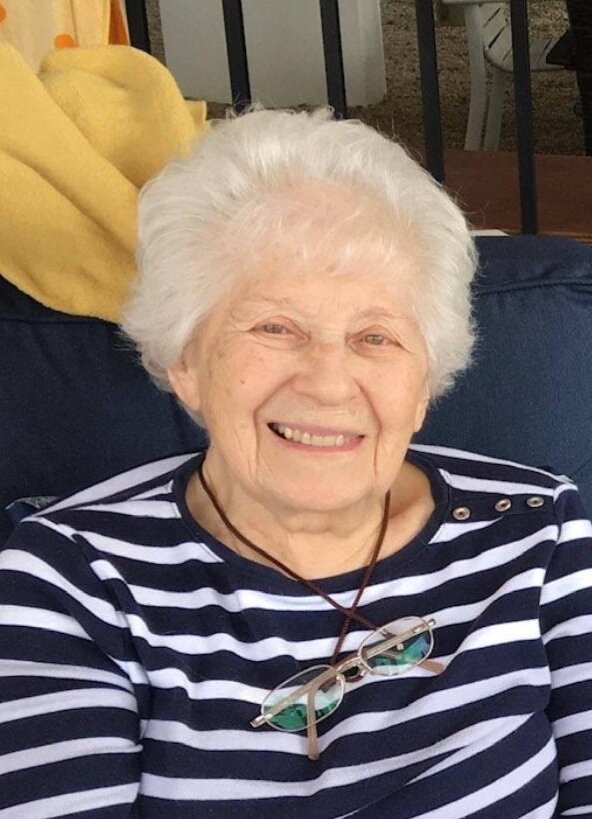 Lily S. Lang passed into God’s loving arms on Sunday, July 31, 2022. Lily was born to Widette (formerly Sakakeeny) and Gabriel Shamiah on April 8, 1928 in downtown Brooklyn, NY. She was the youngest of siblings Agnes Zahka, Laurice Hashway, and Joseph Shamiah

Lily was born and raised in Brooklyn, NY, and was a graduate of Fort Hamilton High School in Bay Ridge, Brooklyn.
Lily met her husband Paul A. Lang in the mid 1950’s at Aetna Casualty and Security Co. where they both were employed. They married on January 11, 1958 at Saint Bernadette Roman Catholic Church in Dyker Heights, Brooklyn, and were married for 64 blessed years.
Lily and Paul have three children; Paul (married to Linda), Carol (married to Jerry) and Widette (married to Russell). They have eight grandchildren; Kristen (married to Joseph Gogel), Allison, Jamie (married to Michael Maccione), Susan (married to Cole Biri), Catherine (married to David Lear), Lauren, Sarah and Jeffrey. They also have a great-granddaughter named Lily.
Lily was an avid Canasta and Bridge player, and played with many friends throughout the years. She was an experienced seamstress and loved to knit and crochet.
As her children grew, Lily held jobs working for Brooklyn Union Gas Company, an insurance brokering agency and later worked as a saleswoman at a gift shop in her neighborhood of Bay Ridge. She enjoyed the family's summer home in Belmar, NJ and spent much time there enjoying relatives and friends. She was a loving wife and mother who spent many hours in the kitchen making outstanding Syrian dishes and desserts for friends and family.
Lily was a member of St. Mary’s Syrian Orthodox Church in Bay Ridge, where she was very active. At one time she was president of the Ladies Society. She greatly enjoyed her time living in Fellowship Village for six and one half years where Lily made new friends. In her final months, Lily was blessed with a fine staff of doctors, nurses and care givers.
Lily will be missed dearly by all of her family and friends. Although she is now with the Lord in his great heaven above, her memory here on earth will be eternal. Her love of family and friends will continue unbroken.
God bless her always.
Visitation will be held on Wednesday, August 3, 2022 from 4:00 - 8:00 pm at Gallaway & Crane Funeral Home, 101 S. Finley Avenue, Basking Ridge, NJ 07920. Funeral Service will be held on Thursday, August 4, 2022, 10:00am at St. Mary's Antiochian Orthodox Church, 192 81st Street, Brooklyn, NY 11209. Burial will be private for the family.
For anyone who wishes to express a kind act of sympathy, in lieu of flowers, the family requests to consider making a donation to St. Mary's Church, 192 81st Street, Brooklyn, NY 11209 or a charity of your choice in memory of Lily.
To send flowers to the family or plant a tree in memory of Lily Lang, please visit Tribute Store
Wednesday
3
August