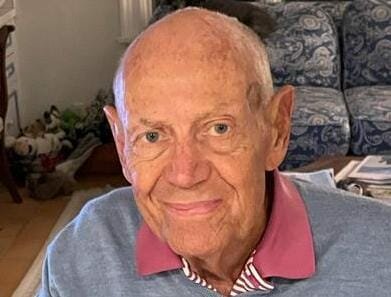 Edward Whitford Probert of Lake Wales, Florida died on July 31, 2022, at Morristown Memorial Hospital at the age of 86.  Ted was born on May 27, 1936, in Orange, New Jersey to the late George & Ethel Probert.  After Phillips Academy in 1954and Yale University in 1958, he attended law school at the University of Virginia.  Upon graduation from law school in 1961, Ted became a Vice-President at J.P. Morgan where he worked for 27 years.  While there he most notably managed the William R. Kenan, Jr. Charitable Trust and worked to substantially improve the institutional endowments of many educational institutions from the secondary school to graduate level programs.  After J.P. Morgan, Ted became the President and CEO and later Chairman of the Fannie Ripple Foundation.  In this capacity Ted directed initiatives addressing cancer, heart disease, the health of women and the elderly, and the maintenance of our nation’s hospitals.  Ted was a man of faith, who served on the vestry as a senior warden at St. Peter’s Church in Morristown.  A dedicated and passionate leader who advocated for philanthropy broadly and through his efforts helped to advance many non-profits and charitable organizations.  Ted volunteered for several years with the students at Lake Wales High School on public speaking and leadership training.  He and his wife, Ann Linen Probert, co-chaired the Campaign for the Jersey Battered Women’s Serviceand the 1990 Curtis Cup at Somerset Hills Country Club.  Ted was a member of the U.S. Senior Golf Association and together Ted and Ann were a formidable husband-wife team in many golf tournaments.   Ted was known for his dedicated professionalism, his attention to detail, his sense of proper decorum and his deep passion and love for his family.   An old-school man of integrity and the importance of always doing things the right way, there is so much more that could be said about this magnificent man.  Suffice to say Ted was well-loved and will be sorely missed.   He is survived by his wife and loving partner of 62 years, Ann, and their three children: Ted and his wife, Andi, Leslie and her husband Steve, and David, as well as his five grandchildren, Campbell and Tanner Probert, Emily Sirbaugh Johnson and her husband, Rand, and Ted and Colin Sirbaugh. The family requests in lieu of flowers that any who wish to honor Ted’s life support JBWS or the Bok Tower Gardens Carillon Program. Please send online condolences by visiting:  gcfuneralhome.com. A celebration of Ted’s life will be held later this year in Florida.

Share Your Memory of
Edward
Upload Your Memory View All Memories
Be the first to upload a memory!
Share A Memory