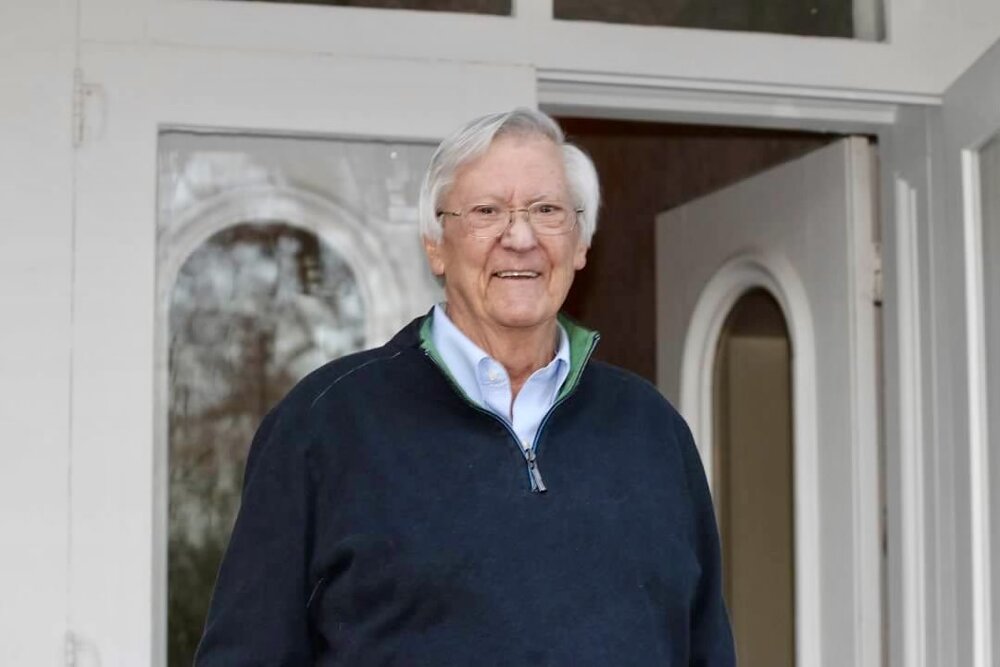 Get Directions
Tuesday
3
May

Please share a memory of George to include in a keepsake book for family and friends.
View Tribute Book

George Michinard of Basking Ridge, NJ passed away at the age of 87 on Monday April 18th. Betty, his loving wife of 60 years was by his side until the end.

Big George, or “Mr. Mich”, as most people called him was a fixture in the Basking Ridge community for over 50 years. Whether he was coaching little league, serving as commissioner of Somerset Hills Pop Warner, or ushering and volunteering at St. James Church, he was always willing to contribute and always did so with a warm smile.

George was born April 1st, 1935 in his beloved city of New Orleans. His parents, George Sr. and Josephine Michinard, along with his sisters Marilyn and Paula lived a fun filled life that only those from New Orleans can truly understand. His crowning achievement was being named King of Apollo in 1956. Soon after graduating from Tulane University, George decided he wanted to give Wall Street a shot and moved to NYC with his best friend Nolte DeRussy.

It was there in NYC that George met his future bride. George and Betty met on St. Joseph’s Day in 1961. It was love at first site for both. Two weeks after meeting Betty, George sent a post card to Betty’s parents telling them that he was going to marry their daughter. Unfortunately, The Berlin Air Crisis temporarily interrupted those plans as George reported for duty with the Air Force. George and Betty were finally married on May 26th, 1962. After a few years of living in the Plainfields, George and Betty moved back to New Orleans with their first two children George III and Paul. However, Wall Street kept calling and in 1970, George and his family moved to Basking Ridge permanently. “Georgie”, as his friends in the business lovingly referred to him, enjoyed a long and successful career on Wall Street with lengthy stops at Smith Barney and Citigroup.  The move back to NJ also welcomed new children with the addition of Elizabeth and Andrew. George loved his life in Basking Ridge and was steadfast in his desire to live out his days at the family house.

George had a huge heart and loved being around his family and friends. Frankly, if you were a friend you were treated as family. George was always waiting to greet you at the back door and see you off as you were leaving. George had the rare ability to make everyone feel welcome and important. His love of life will be greatly missed. He loved travelling and was fortunate to see most of the world with Betty by his side. He loved playing and watching all sports, especially his children and grandchildren. He particularly loved golf. We just hope in heaven that the fairways are a little wider and that his putts find the bottom of the cup a little more often.

George was predeceased by his parents George and Josephine Michinard, and sisters, Marilyn (Edward) Rapier, and Paula (Don) Mensen.

George’s obituary would not be complete without mentioning his nieces and nephews who he truly loved as if they were his own: Lyn (Weese) Levert, Edward (Lisa) Rapier, Richard (Elizabeth) Rapier, Paula (David) Kepper, Debbie (Chip) Flanagan.

In lieu of flowers, donations can be made in George’s honor to St. Jude’s Children’s Hospital or St. James Catholic Men of Charity.

Visitation Services will be held at Galloway and Crane Funeral Home on Monday May 2nd from 4-7pm.

Memorial Mass will be held at St. James Church Tuesday May,3rd at 11AM. Repass to follow at the Basking Ridge Country Club.