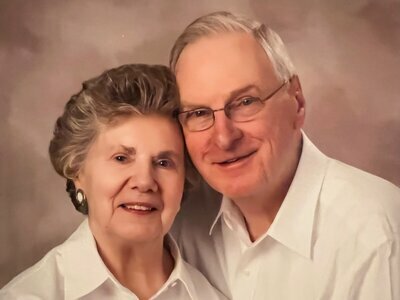 Please share a memory of Ruth to include in a keepsake book for family and friends.
View Tribute Book

Ruth M. Shiels passed away peacefully at the age of 89 on March 10, 2022 at her home in Brightview Randolph, three weeks after we said goodbye to her husband, John (Jack).

Ruth was born in 1932 to Margaret Scott Besson and Robert Besson of Newark, NJ.  Raised in Newark, she attended St. Patrick’s Grammar School and St. Michael’s High School in the same class as the love of her life and future husband, Jack.  She and Jack shared the loss of both of their fathers in February 1942.  She loved sports and was captain of her high school girls’ varsity basketball team, when girls played as a team of six on half-court.  After her 1950 high school graduation, Ruth put herself through college at the College of Saint Elizabeth (now Saint Elizabeth University), an institution to which she maintained a lifelong loyalty, for its financial and spiritual support and for its role in encouraging her passion for literature.  When she earned a Bachelor of Arts in English Literature degree in 1954, she became the first in her family to earn a college degree.

Ruth and Jack married in 1956, and in 1961 they moved to Glen Ridge, NJ where they raised their four daughters.  Ruth was an active volunteer in Glen Ridge, serving as a Girl Scout leader, a CCD teacher, a member of the Home & School Association, and a longtime supporter of the Glen Ridge High School Marching Band Music Parents Association.  Ruth and Jack never missed any of their daughters’ GRHS marching and concert band performances, attending every concert, football game and band competition regardless of the weather. She was an active alumna of St. Elizabeth’s University and spent many years volunteering with the AAUW.   She continued her love of sports as an avid fan of the Georgetown Hoyas, the NY Knicks, and the NY Yankees.

Ruth was a reference librarian at the Glen Ridge Public Library for almost twenty years. After her 1994 retirement, she declared it “time to give back for all that God had given” her and her family.  She and Jack moved to Mendham, NJ in 1994, and Ruth became a volunteer and a Eucharistic minister at St. Joseph’s Church.  In recognition of Ruth and Jack’s service to the Church, the Diocese of Paterson honored Ruth and Jack with the Vivere Christus Est award.  She and Jack were able to pursue their passion for travel through frequent trips throughout the US and to Europe, including multiple trips to Ireland and Switzerland where Ruth had relatives, and also to Australia and New Zealand.  Ruth also was an enthusiastic member of her “Fortnightly Group” book club in Glen Ridge and Bloomfield for over thirty years. One of her greatest legacies was to encourage in her children and grandchildren a love of learning and reading.

Ruth was predeceased by Jack, her cherished husband of over 65 years.  She is survived by her beloved daughters:  Margaret (Gus) Konitzky, of Topsham, Maine, Ruth (Victor) Corazza of Bernardsville, NJ, Patricia Shiels of New York City, and Catherine (Brian) Moore of Basking Ridge, NJ.  She also is survived by her four treasured grandchildren: Brian (Nathalie) and Madeline Moore, and Samuel and Emma Corazza.

Ruth’s family would like to express our sincere appreciation to all the staff at Brightview Randolph, especially the Associates in Brightview’s Wellspring Village and Assisted Living, and to Cecilia Jameson, whom we met as a caregiver and whom we now consider a family member.

Visitation will be held at Gallaway & Crane Funeral Home, 101 South Finley Ave., Basking Ridge, NJ, on Tuesday, March 15 from 4 pm – 7 pm.  A Mass of Christian Burial will be celebrated at St. Joseph’s Church in Mendham, on Wednesday, March 16 at 10:30 am, followed by entombment at Our Lady Chapel in Holy Cross Cemetery, Basking Ridge, NJ

In lieu of flowers, Ruth’s family requests donations to her alma mater Saint Elizabeth University (formerly the College of Saint Elizabeth) and to its Sisters of Charity, so they may continue to develop and support young women and men. Ruth will be remembered for her love of family, her strong Catholic faith, her passion for her books and her lifelong support of equal opportunities for women.

To send flowers to the family or plant a tree in memory of Ruth Shiels, please visit Tribute Store
Tuesday
15
March