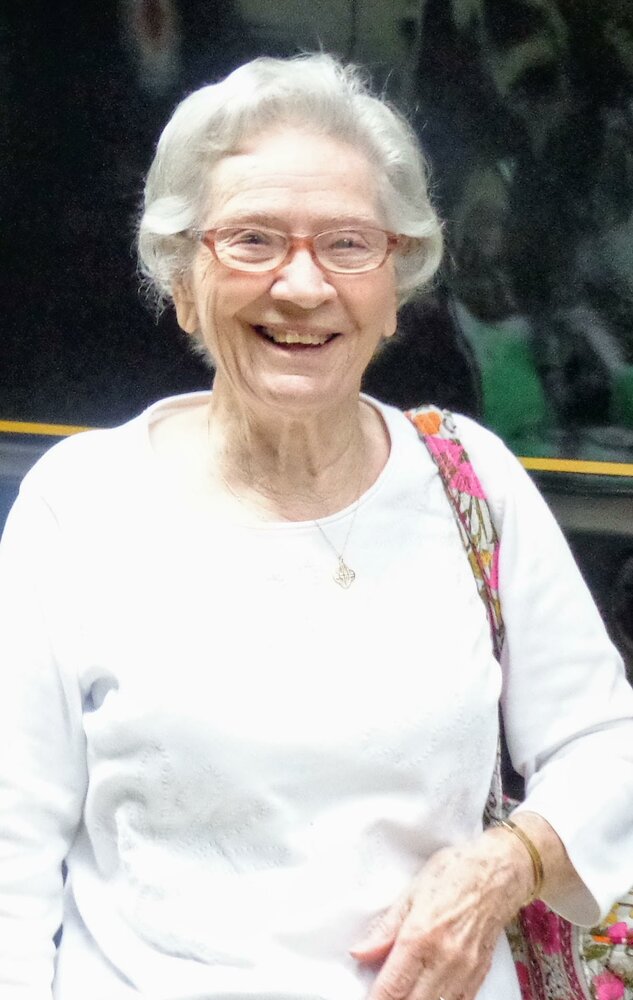 Please share a memory of Louise to include in a keepsake book for family and friends.
View Tribute Book
Louise Caroline (Velletri) Sloss, mother, grandmother, great-grandmother, and wife of the late Herbert L. Sloss, died December 22, 2021, at the Fort Washington Estates ACTS Community in Fort Washington, PA. She was 93. Louise lived at Fort Washington Estates for nine years after relocating there with her husband from the home they had built for their family in the 1950s in Basking Ridge, NJ. Herb Sloss died in 2014, also at age 93. The couple had met on a New Year’s Eve blind date and were married in 1948. Their daughter Gail (Thomas Infield) was born two years later and was followed by Joan (L.G. Sheets), Gary (Jean), and Laura (Peter Thompson). They lost a child, Jay, in infancy. A 1945 graduate of Bernards High School, Louise worked as a bookkeeper for Somerset Hills Dairy in Bernardsville, NJ. When she was home raising children, she helped her husband, who was a milkman at the dairy, with his invoices. As her children grew older and attended Bernards Township schools, she returned to work in the cafeteria at Oak Street School in Basking Ridge, from which she retired. Both she and her husband attended Basking Ridge Presbyterian Church until they became charter members of the First Presbyterian Church of Bernardsville, where they remained active in the church until they moved to Fort Washington. Louise grew up in an Italian neighborhood of Bernardsville, the daughter of Federico Velletri, a construction contractor, and Elizabeth (Lisa) Bernardino Velletri. Her father was a veteran of both the Italian army and the U.S. Army, in which he served during World War I. She had one sibling, her late brother, Joseph. Survivors, besides her children, include eight grandchildren and 10 great-grandchildren. Several days before her death, two of her daughters and one of her granddaughters separately leafed through Bibles that Louise kept in a bookcase in her room. Bookmarks that she had made pointed them to a passage of scripture from 2nd Corinthians, which seemed to them to be her final message of faith. “So do not lose heart. Though our outer nature is wasting away, our inner nature is being renewed every day. For this slight momentary affliction is preparing us for an eternal weight of glory beyond all comparison...The things that are unseen are eternal.” Visitation will be held on Thursday, January 6, 2022, from 9:30-10:30 am at Gallaway & Crane Funeral Home, 101 S. Finley Ave., Basking Ridge, NJ. Graveside prayers will follow at 11:00 am at Basking Ridge Presbyterian Church Cemetery, with Service at 11:30 am at Basking Ridge Presbyterian Church, 1 East Oak St., Basking Ridge, NJ. Masks required at funeral home and church. If you would like to honor Louise Sloss, the family suggests a memorial contribution to the charity of your choice. For further information, or to leave an online condolence message please visit www.gcfuneralhome.com
To send flowers to the family or plant a tree in memory of Louise Sloss, please visit Tribute Store
Thursday
6
January

Look inside to read what others have shared
Family and friends are coming together online to create a special keepsake. Every memory left on the online obituary will be automatically included in this book.
View Tribute Book
Share Your Memory of
Louise
Upload Your Memory View All Memories
Be the first to upload a memory!
Share A Memory
Send Flowers
Plant a Tree