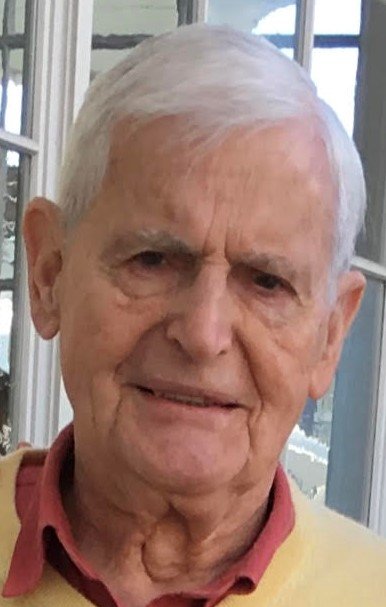 Hugh Seccomb Wallace, age 89, passed away on April 23, 2019 at Morristown Medical Center. He was born on March 20, 1930 in Boston, Massachusetts to Edward Seccomb Wallace and Elsie Dow Wallace. His lifelong love for the water grew out of a childhood spent in Marion, Massachusetts, a small seaside town. He graduated Brooks School in North Andover, Massachusetts in 1948. After serving in the United States Air Force, he attended Boston University where he was a member of Sigma Alpha Epsilon fraternity and co-captain (and later coach) of the varsity swimming team. After graduating in 1955 with a Masters degree in Communications, Hugh began an esteemed broadcasting career as an account executive at WHYN in Springfield, Massachusetts, where he met his wife Phyllis Stothert. His career continued at RKO-owned WNAC and then at RKO Radio, where he was general manager at WOR-FM in New York and then WKHJ-AM in Los Angeles. He was then asked to head the newly formed RKO Tape division, and ultimately retired from its acquirer American Sound and Video.

In his free time, Hugh enjoyed spending time with his wife Phyllis, their four daughters and grandchildren. When his daughters were young, he could be found most weekends supporting them at local horse shows or leading their 4-H club activities. He was an avid runner, often seen crossing finish lines at local races. He was a very active member of his church and community, always jumping in when and where needed. In 2018, he received a Lifetime Achievement Award from the Episcopal Diocese of Newark in recognition of his tireless service. He was a prostate cancer survivor and he continued to provide cancer support and guidance to others through a leadership role in the Us Too men’s group at Morristown Medical Center for twenty years. He loved animals and could often be found with a cat in his lap or a dog at his feet.

A memorial service will be held on Saturday, May 11 at 1:00 p.m. at All Saints’ Episcopal Church in Millington, NJ with Reverend Victoria McGrath officiating. In lieu of flowers, donations can be made in Hugh’s memory to fund tree planting at the church.

To send flowers to the family or plant a tree in memory of Hugh Wallace, please visit Tribute Store
Services for Hugh Wallace
There are no events scheduled. You can still show your support by sending flowers directly to the family, or planting a memorial tree in memory of Hugh Wallace.
Visit the Tribute Store
Share Your Memory of
Hugh
Upload Your Memory View All Memories
Be the first to upload a memory!
Share A Memory
Send Flowers