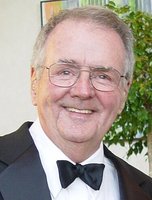 Raymond J. Donovan, of New Vernon, New Jersey, the 17th United States Secretary of Labor, died at home on June 2, 2021 surrounded by his family. The cause of death was congestive heart failure. He was 90 years old. Mr. Donovan was born on August 31, 1930 to David and Eleanor Donovan in the St. Andrew’s section of Bayonne, NJ and was one of 12 children. He began his education at St. Andrew’s School and St. Peter’s Prep in Jersey City before entering Holy Trinity Seminary in Holy Trinity, Alabama for four years and Notre Dame Seminary in New Orleans, Louisiana for two years. Prior to ordination he left the seminary to pursue a business career in New Jersey. In 1957, he became a partner in Schiavone Construction Company, which became one of the largest heavy construction companies in the US. He also co-founded Fiddler’s Elbow Country Club in Bedminster, NJ which is one of the largest private golf clubs in the country. In 1977, Ray met Ronald Reagan for the first time, which began a journey that would lead to his appointment as the United States Secretary of Labor from 1981-1985. He served his country with distinction during his term. He is famous for his quote describing the outcome of the politically motivated trial against him; “Which office do I go to to get my reputation back?” He will be remembered by many as a loyal friend, honest businessman, faithful member of the Catholic Church, and dedicated patriot. He was an avid reader and loved the game of golf for the camaraderie and friendly competition. He was a lifelong observer and participant in local and national politics. Anyone who met him will also remember him as a sublime raconteur, who entertained family and friends for hours with stories from his life, most of which were generously embellished. He collected stories from his many varied life experiences with his brothers and sisters, friends, coworkers, his fellow cabinet officers, and the President and Vice-President. He will be sorely missed by his wife and best friend of 63 years, Cathy. They supported many charities throughout their marriage, particularly those involved with inner-city education and the Catholic Church. Together, they happily provided a future to many, many disadvantaged children. Mr. Donovan was pre-deceased by his parents and nine of his siblings. He is survived by his wife, Catherine and will be greatly missed by his three children and their spouses; Ken and Kris Donovan, Mary Ellen Stewart and Chris Auleta, and Keith and Sherry Donovan. Pop is also survived by his nine grandchildren, Matt and his wife Caitlin, Cate, and Tommy Donovan, Robert and Hayley Stewart, Lily, Luke, Lucy, and Laurel Donovan, and one great-grandchild, Jack Raymond Donovan. The Rite of Christian Burial will be held at The Shrine of St. Joseph, 1050 Long Hill Rd, Stirling, NJ 07980 on June 8, 2021 at 11:00am. For further information or to leave an online condolence message please visit www.gcfuneralhome.com. In lieu of flowers, the family asks that you consider a gift to Tri-County Scholarship Fund, Mendham, New Jersey. If you can not make the Memorial Mass at the church, it will be live streamed. Please go to the church website at www.shrineofsaintjoseph.com