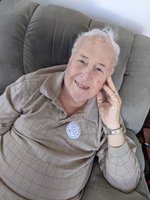 George Louis Cronk, known by all who loved him as Bud, 89 of Warren, NJ passed away on March 14, 2021 at Overlook Hospital in Summit, NJ after battling cancer. Visitation will be held at Gallaway and Crane Funeral Home on Wednesday,March 17, 2021 from 10-11:30 followed by internment at Evergreen Cemetery at noon.. Bud was born in Denville, NJ to Louise and George Cronk Sr. on December 2, 1931. He grew up in a family of dairy farmers. In 1951 he enlisted in the Navy during the Korean War and served as a helicopter mechanic until his honorable discharge in 1954. He returned home in 1952 to marry the love of his life Ginnie and they were married for 52 years. While raising his family Bud was an automobile mechanic, retiring in 1995. Throughout his life Bud enjoyed camping, fishing and travelling with family and went on many cruise trips .He also enjoyed his trips to the casino. In recent years he found love and companionship with Kay Richter which made him so happy in his final years. Bud is predeceased by his wife, Virginia V. Cronk. He is survived by his son George Cronk III and family from Angier, NC and daughter, Debra Mahon, her husband Dan and grandsons, William and Brian of Warren, NJ. He is predeceased by his brother, Gerald Cronk and sister Patricia Fillmore. Memorial donations in lieu of flowers may be made to St. Jude Children's Hospital at stjude.org