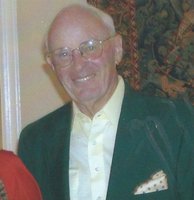 Thomas Russell Williams of New Vernon, NJ and Carefree, AZ passed away on March 12 at the age of 92. He was born in Orange, New Jersey on August 14, 1928 to Franklin and Helen Williams. Tom grew up in Fanwood, NJ and graduated from Scotch Plains High School in 1946 where he was track team captain and set a NJ “Half Mile” record. He also played trumpet in the marching and dance bands. Tom graduated from Beloit College in 1950 and spent two years with Union Securities before joining Kidder Peabody & Co in 1952 where he specialized as a public utility analyst and corporate finance associate. In 1961 he helped found W.H. Reaves and Co. Inc. and retired as Executive Vice President in 2000. The firm specializes in public utility company equities. Tom was a member of the New York Stock Exchange for 27 years as well as the New York Society of Security Analysts and the Wall Street Utility Group. Tom married Emilie Pandick in 1954. Emilie was a principal at Pandick Press, a financial printing firm. She predeceased Tom on April 23, 2012. An enthusiastic golfer, as was Emilie, Tom was a member of the Pine Valley Golf Club, NJ, Morris County Golf Club, NJ, Saucon Valley Golf Club, PA, Desert Mountain Club, AZ and Desert Forest Golf Club, AZ. He served on the Board of Governors of Morris County Golf Club for four years. In addition to skiing and running (2 miles every day) Tom was an avid fly fisherman and was a member of the DeBruce Fly Fishing Club in NY. For many years he flew his own Piper Archer and logged over 1800 hours of flight time. He was a dedicated New Jersey history buff, and used his airplane to search out old railroads and canals. He was an avid hiker and had walked large portions of the Morris Canal. He also spent nearly 70 years at his summer retreat at Lewey Lake in the Adirondacks climbing mountains, hiking and fishing. A long-time traditional jazz fan, Tom and Emilie were co-founders of the New Jersey Jazz Society and hosted numerous jazz concerts at their home and Morris County Golf Club as well. Tom and Emilie shared a love of adventure and traveled extensively in Europe and North America and maintained a winter home in Carefree, AZ for many years. Tom is survived by his brother Phil (Joanne) of Fanwood, NJ, sons Peter (Jane) of New Vernon and Scott (Robin) of Sandy, Utah, grandchildren, Alexander, Zachery, Emily, and great grandchildren, Drake and Lily. There will be a brief burial memorial at 11 a.m. on Wednesday, March 17 at the New Vernon Cemetery for anyone who would like to attend. Social Distancing and Masks required. Tom has requested that in lieu of flowers contributions may be made in his memory to The Seeing Eye, Box 375, Morristown, NJ 07963-0375.