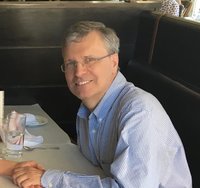 George Bailey (Chip) Hughes, Jr., 62, passed away on Sunday, March 7, 2021 after a battle with cancer. He leaves a legacy of kindness and good works. In his understated way, he changed the world for the better. Born in Rochester, NY, he attended college in Los Angeles at USC and completed his MBA at Harvard University in 1984. He met his beloved wife, Claudia, while working as an intern at Corning Glass Works in 1983. She was the love of his life for 35 years. He leaves two children, Joseph and Elizabeth, who he considered his greatest accomplishment and was honored to be their father. He was delighted to have such a fine son-in-law in Matthew Barry. Chip had a rare combination of intelligence, integrity, wisdom and compassion. He was well-known for his leadership skills and had a profound positive impact on the people he knew and worked with. A devoted parishioner at St Marks Episcopal church in Basking Ridge, NJ, he served on the vestry and most recently, as senior warden. The Alpha program was close to his heart and he helped initiate its start at St Marks. Among his many professional accomplishments were tenures at McKinsey & Co., Blue Capital, and K-12. His most recent position at McKinsey was as Global Director of Practice Operations. His volunteer interests were with RFB&D as well as Big Brothers. He was an avid sports fan. But, most of all, he loved his family and placed a priority on providing for them as a father and a husband. A memorial service will be held in his honor at St Marks Episcopal Church when we can safely gather. In lieu of flowers, donations may be made to St Marks Episcopal Church, 140 South Finley Avenue, Basking Ridge NJ 07920 or to the Somerset County Food Bank, P.O. Box 149, Bound Brook, NJ 08805.