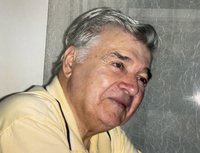 Howard Behre Jr., 91, of Bedminster passed away at home March 3, 2021, surrounded by his loving children. He was born to Howard and Alma Behre in March of 1929 in Green Village, New Jersey. He attended schools in Madison and was later drafted into the United States Army and served in the Korean War.  Upon returning, he was stationed at Fort Rucker in Alabama where he met the love of his life, Doris. They were married in 1953 and raised their family in Bernardsville until her passing in 2012. After spending much of his life as an Auto Mechanic, Howard took a job with Gallaway and Crane Funeral Home where he spent ten years as a Funeral Attendant. He was an avid Yankees and Giants fan who loved to hunt and fish with his friends and family. He enjoyed watching the birds in his backyard and tending to his many gardens. Howard loved sharing stories about his childhood, participating in field trials, and spending time with his family. He was predeceased by his wife Doris, son Howard III, sister Marie Damiano, and brother Joseph Behre. He is survived by daughters Debra (Robert) Mangano and Charlotte (Willie) Baker of Pennsylvania, and son George Behre of Bedminster; seven grandchildren Robert, Christopher, and Karen Mangano, James Behre, Joseph and Jillian Baker, and Sandy Katsman; and five great grandchildren Oliver, Charlotte, Graham, Milo, and Adrian; sisters Alma Norman, Evelyn Cramer, Janet Fondaco, and Christina Van Ness. Visitation will be Thursday, March 11, 2021 from 4:00 to 6:30 pm at Gallaway and Crane Funeral Home, 101 South Finley Ave, Basking Ridge. In lieu of flowers, donations may be made to the American Diabetes Association. For further information, or to leave an online condolence message please visit www.gcfuneralhome.com