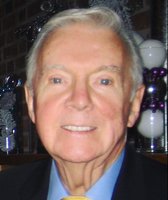 Louis “Lou” G. Kennedy, 86, of Basking Ridge, NJ, passed away peacefully on Tuesday, February 9, 2021. Lou was born and raised in Brooklyn, NY, son of Walter and Harriet (Mullin) Kennedy, and was the youngest of five children. He was a graduate of Brooklyn Technical High School, received his bachelor’s degree from St. John’s University and his MBA from Seton Hall University. Lou proudly served in the US Army’s Military Intelligence Corps, stationed in Eritrea, Africa during the Korean War. He was a Life Member of the Veterans of Foreign Wars, Bernardsville Post 7858. Lou met the love of his life, Eileen McGarry, at the Parker House in Sea Girt, NJ in 1960 and they married in 1961. Lou and Eileen settled in Succasunna, NJ and raised four children. He was very active coaching Little League Baseball in Roxbury and supporting his children in all of their endeavors. Lou worked for Bell Labs in Whippany and for several years in Naperville, Ill. before retiring in 1995 after 42 years. Lou and his beautiful bride loved to travel the world. A couple of his favorite destinations were the 50th Anniversary of D-Day in Normandy, and a spiritual pilgrimage to Jerusalem. Lou was so loved by everyone and had many dear friends, especially the group from the Forest Drive neighborhood in Succasunna. His sense of humor and fun-loving spirit made everyone around him feel welcomed. Lou was a devout Catholic and member of the Knights of Columbus. He was a member of St. Therese Church in Succasunna and the Church of St. James in Basking Ridge, where he taught CCD and was a volunteer for the Share Your Bread food bank program. Lou is survived by Eileen (née McGarry) his wife of 59 years, his sister Rosemary Lane, his children David (Mary Kate) of Hackettstown, NJ, Robert (Janine) of Greenwich CT, Kerry of Basking Ridge and Devin (Sonia) of Cary, NC. Known as “Pop-Pop”, his kind and giving soul will be forever missed by his grandchildren, Kate, Patrick, Kevin, Daryl, Jaden, Morgan, Shane, Kayla, Lauren and Ryan, in addition to 20 nieces and nephews. Lou was predeceased by his parents, Walter D. and Harriet, brothers Blake and Walter and sister Eileen Lockwood. In lieu of flowers, the family would appreciate an act of kindness for someone less fortunate. A Memorial Mass will be held in the near future at the Church of St. James, 184 South Finley Ave, Basking Ridge, NJ.