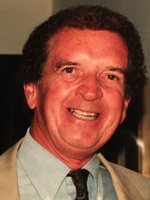 GERARD “JERRY” LYNCH, 86 of Bedminster, Engineer Gerard Lynch, 86, of Bedminster, NJ passed away peacefully at home on Saturday, January 9, 2021. He leaves behind his loving wife of 60 years, Gretchen and two sons; Keith and wife Cindy of Bernardsville, NJ and their children, Ashley of Boynton Beach, FL, Ryan of Stamford, CT and Christopher of Bernardsville; Shawn and his wife Jennifer and their children, Colin, Reese and Chase all of Basking Ridge, NJ. Jerry was born on August 4, 1934 to Thomas and Helen (nee Sand) Lynch in the Vailsburg section of Newark, NJ. He is predeceased by his brothers, Thomas, Laurence and Robert and is survived by his sister Marie Burke of Manasquan, NJ. Jerry graduated from Seton Hall Preparatory School in South Orange, NJ in 1952. He served in the US Air Force as a Technical Instructor, Air Training Command at the Keesler Air Force Base, MS. He graduated from Fairleigh Dickinson University in 1967 with a Bachelor of Science degree in Industrial Engineering. Jerry was employed with Automatic Switch Co. in Florham Park, NJ as a Sales Engineer for 25 years, lastly serving as District Sales Manager of the Syracuse, NY office. He thoroughly enjoyed his sales career with Bürkert USA in Irvine, CA; United Electric Controls, Watertown, MA and O’Keefe Controls Co. in Monroe, CT. Before retiring he founded GFL Technical Sales in Bedminster, NJ. Jerry served as Secretary of the Essex Electrical League as well as the NJ section of the Instrument Society of America. He was an active volunteer with the Boy Scouts of America. He was also a member of the “Believer’s Quartet” entertaining at numerous church functions. He summered at the Jersey Shore for over 30 years in Ocean Beach and Brielle. He loved bareboat sailing in the Caribbean and was an avid tennis player. Jerry loved traveling and enjoyed reading about World War II. Joining both passions, he followed the path of World War II throughout Europe and was fortunate to fly in vintage World War II planes. The family will celebrate a private Catholic Requiem Mass at St. Elizabeth Church in Far Hills, NJ. A park bench will be placed in Miller Lane Park in Bedminster, NJ “In Memory of Jerry Lynch.” In lieu of flowers, donations to the Far Hills-Bedminster First Aid Squad, PO Box 834, Far Hills, NJ 07931 would be gratefully appreciated.