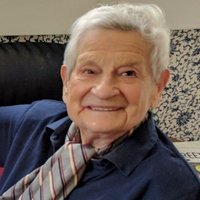 Marion J. Kennedy, 99, died peacefully in her Bernardsville home surrounded by her family on November 15, 2020. Her husband of fifty-seven years, Thomas G. Kennedy, died in 2003. Marion was the only child of Ernest and Vida May Martin of Lawrence, Massachusetts. At seventeen, Marion began a singing career on the radio where she came to the attention of Bob Gleason, leader of a big band from the Boston area. He hired her and she became the vocalist for The Bob Gleason Big Band touring throughout New England. Marion continued to sing throughout her life, joining the Somerset Hills Chorus shortly after arriving in Bernardsville, and then singing with a local women’s choir, enjoying the companionship of friends as well as the music. Marion met her husband, Tom, while living in Brooklyn and working in Manhattan for Exxon (Esso). They loved to dance and enjoyed the prewar club scene in NYC. After WWII, they married and settled in Massapequa, Long Island, where they raised their two daughters. In 1970, Exxon opened offices in Florham Park and Marion and Tom moved to Bernardsville. She immediately joined the volunteers in the Local History Room of Bernardsville Library. She chaired the Local History Committee during which time they published the second addition of “Among the Blue Hills,” a history of Bernardsville. Marion devoted herself to the League of Women Voters, serving as its president for several years. She was also a founding member of an investment club. Marion’s longevity can be attributed to her daily walk, in every weather resolutely logging her three miles. When asked how long it took her to complete her route, she replied that it depended upon how many friends she ran into and how long they chatted. Marion found great delight in caring for her gardens. Her most precious time of day was early morning, when she would sit in the alcove of her bay window, tea cup in hand, cat by her side, and watch the sun rise from below distant hills flooding her room with light. Marion’s home was the source of great love for all her family. It was where holidays and family events were celebrated. Marion is survived by her step-brother, Steven James Martin of Florida, her daughters and their spouses, Kate Kennedy (Karen Slaven) and Pat Kennedy-Grant (Philip), her grandchildren Jonathan Zwergel, Sara Forsythe (Greg), Justin Kennedy-Grant (Andrea Deal), Alex Kennedy-Grant (Emily Skillings), and Abigail Kennedy-Grant, and her great-grandchildren Martin and Joseph Zwergel, Aiden and Laura Forsythe, and Hazel Kennedy-Grant. Due to the coronavirus, a memorial service will be delayed until a future date. In lieu of flowers, donations may be made in Marion’s name to The Foundation Fighting Blindness https://donate.fightingblindness.org/give, or JDRF (Type 1 diabetes) https://www.jdrf.org or Bernardsville Public Library Local History Committee, 1 Anderson Hill Road, Bernardsville 07924.