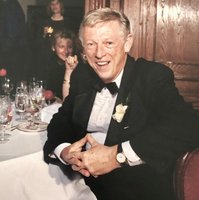 Donald Peter O’Connor, 86 years old, departed this life on September 12, 2020. Donald was born on December 4, 1933 in Brooklyn, New York to William O’Connor and Ann Dollard O’Connor. He grew up in Queens, New York, attending St. John’s Preparatory Academy. He received his Bachelor of Science from St. John’s University in 1955, helping to fund his studies by working as “soda jerk” at the famous Jahns Ice Cream Parlor in Kew Gardens, NY. He received his J.D. from Columbia University in 1960 and qualified for the New York Bar. He took a position at Touche Ross, one of the then “Big Eight” accounting firms. He would retire from Deloitte & Touche as a tax partner in 1995. He continued his career as a certified public accountant and tax attorney locally, serving many families through generations at the firm of Kinzel and Company in West Caldwell, NJ up to his death last week. He married Christa Keinberger in 1961. They and their four children settled in Bernardsville in 1972. An avid golfer, Donald was a member of the Roxciticus Golf Club, serving as treasurer for two terms. With a ready laugh, Donald was a great storyteller and never was without a joke or two to share. Donald is survived by his wife Christa, his daughters Pamela O’Connor (Jon Cannon) and Cara O’Connor (Adam Shirvinski), his sons Mathew O’Connor (Angela Daly) and Daniel O’Connor (Denise Huth), and ten grandchildren. The grandchildren are Emily, Quinn, and Lily Cannon, Caitlin and Anna Shirvinski, Griffin, Kieran, and Rory O’Connor, and Kelly and Devin O’Connor. Donald is predeceased by his parents and brother William J. O’Connor. Private funeral services will be held at Our Lady of Perpetual Help on Friday, September 18. A celebration of Donald’s life will be held at a later date. In lieu of flowers, the family requests that donations be made to Bernardsville Fire Department and First Aid Squad or a charity of choice. For further information, or to to leave an online condolence message please visit www.gcfuneralhome.com