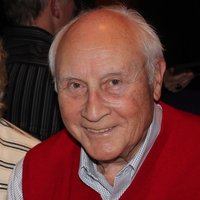 Mr. Gene Spitz, 92, of Monroe Township passed away Monday, July 13, 2020 at his home after almost a year of decline on home hospice care. He will be buried on Thursday in Basking Ridge next to his wife Jean Marie, and his son Steven, both of whom pre-deceased him. A celebration of his life will be held at a later date when gatherings are safe. Gene was born in St. Joseph, Missouri in 1927 to Marion Caneday Spitz and Clarence Spitz and spent his childhood and early adult years there with his younger brother, Owen. After graduating from Kings Point Merchant Marine Academy and serving in the Merchant Marines, Gene attended the University of Missouri and obtained his Juris Doctorate degree. He met Jean Marie and they married in 1952 before moving to the east coast and settling in Basking Ridge where they had two sons, Warren and Steven. Using his experience in the Merchant Marines and his law degree, Gene went to work for Sea-Land and built a career – and a name – for himself in the containerized shipping industry. During his tenure with Sea-Land, Gene traveled extensively around the globe often with family members in tow. He was well known and well regarded in the maritime law circles so much so that when he retired at age 55, he continued to work as an arbiter for maritime law cases for 35 years. Like his mother, Marion, Gene was a talented athlete and played many sports well. His passion was tennis and he was an avid and lifelong tennis player. He won many club championships over the years in both singles and doubles and continued to play into his 90s at Monroe Tennis Center, where he was beloved by the staff. Gene is survived by his son Warren and daughter-in-law, Felicia, of Princeton, NJ and his grandchildren Ryan, Jeffrey, Maria, and Gideon. He is predeceased by his loving wife of 65 years, Jean Marie Spitz, his son Steven, and his brother Owen. For further information please contact Gallaway and Crane Funeral Home at 908-766-0250, or to light an online condolence candle please visit www.gcfuneralhome.com