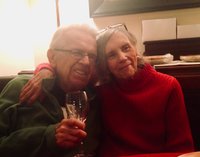 Donald Czerniach, 77, of Basking Ridge, passed away on Friday, May 15, 2020 at his home. Donald was born in Ukraine and fled with his family to a refugee camp in Germany when he was 4 years old during the war in Europe. Sadly his beautiful sister Maria contracted meningitis and passed away at the age of 8 years old. After the war he and his parents came to Ellis Island and started a new life in America. They lived in Newark and Irvington NJ and he attended St. Benedict’s Prep. Upon graduation he went to Seton Hall University and graduated in 1965. Donald met his future wife Roseann Giglio at the college of St. Elizabeth in 1963. He worked for Aetna Insurance Co. for 10 years. During those years he attended Seton Hall Law School at night. After graduation in 1974 he worked for Fred S. James Insurance Brokers; at the age of 42 he was the youngest Senior Vice President. After Fred S. James, he practiced law until he became a case manager for the Division of Youth and Family Services. A lot of his clients were living at Bonnie Brae, in Basking Ridge. Donald loved acting and participated in many amateur theatrical productions. He loved sports, reading mystery novels, and spending time with his children and grandchildren. He was loving, funny, and charitable. He was a communicant at St. James Church in Basking Ridge where he was an Usher. He is survived by his loving wife Roseann of 55 years. Their 4 children Maria (Jeffrey) Nallin, Elizabeth (Vincent) Boccanfuso, Donald (Dr. Shira Doron) Czerniach Jr., and Mark (Kristine) Czerniach. Also survived by his 7 grandchildren Alex and Jeffrey Nallin, Alex and Matt Boccanfuso, Jadon and Ronen Czerniach and Ava Czerniach. Funeral Services will be private for the family. For further information, or to leave an online condolence message please visit www.gcfuneralhome.com