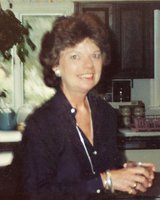 Audrey D. Woodson, 85, of Bernardsville, NJ passed away Sunday February 9,2020 at home peacefully after a prolonged struggle with Parkinson’s disease. Born January 24, 1935 in Elizabeth NJ, Audrey was the daughter of Samuel and EthelvDubow. She grew up in Hillside NJ, graduated from Hillside High School in 1952 and later graduated from Beaver College (now Arcadia University) in 1956. She married William Woodson (Bill) in 1960. After teaching elementary school in Summit NJ, she and Bill moved to Ho-Ho-Kus, NJ for 10 years. She and Bill then brought their young family to Bernardsville in 1973 and have called the Somerset Hills their home for the past four plus decades.Through the years, Audrey gave generously of her time, her good humor and her spirit to friends, causes and organizations across the region. Her passions included AAUW, the Bernardsville Garden Club and most importantly, The Bernardsville Library and the Friends of the Shelter of Somerset. For the Bernardsville Library, she spent years helping to raise money for the new library facility that opened in 2000 and served on the Friends Board of the Library Association for nearly a decade. She remained an honorary Trustee of the Library Foundation until her death. For the Friends of the Shelter, she took on many activities to support the cause against domestic violence. In 2012, she was recognized by The Friends of the Shelter and the Resource Center for her significant contributions and dedication to all the organization’s initiatives.Audrey was blessed to have her beloved husband Bill as her primary caregiver for nearly two decades. She is survived by Bill, her daughter Stephanie of Chicago, IL;her son Bill and daughter-in law Trish also of Chicago, IL; her twin grand children Natalie and Billy; her brother David, 93 of Lake Mary, Florida as well as an extended family of nieces, nephews, and grand nephews.The family has not yet announced plans for a memorial service. They ask that lieu of flowers, donations be made to Safe+Sound Somerset. For further information, or to leave an online condolence message please visit www.gcfuneralhome.com