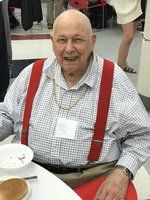 Ernest Hicks, age 96, of Basking Ridge, New Jersey, died peacefully on February 7,2020, surrounded by loving family members.   Son of Ernest and Myrtle Hicks, Ernie was born in Basking Ridge, NJ and lived there his entire life.  He attended Bernards High School where he was a varsity member of the track team, manager of the basketball team, and member of the band, orchestra, and swing band.  He graduated from Bernards High School in 1941 and began prearranged employment in a training program at Sperry Gyroscope Company, a manufacturer of technical military equipment in Brooklyn, NY.  Because World War II was heating up, on November 30, 1942, he volunteered to serve in the U.S. Navy.  After “boot” training, he was sent to radioman school to learn U.S. Navy radio operations and then was sent on to Merchant Shipping School to learn merchant ship and convoy procedures,including blinker, semaphore, and signal flags. He sailed on a number of Liberty Ships and an oil tanker to ports in the Middle East, Belgium, and across the Pacific to the Philippines and Hawaii.  Following his discharge from the U.S. Navy in February 1946, he returned to New York University (NYU) and graduated with a B.S. degree in 1948.  He was then employed by Price Water house & Co., Certified Public Accountants from 1948 to 1953.  He subsequently accepted a position as Assistant Comptroller of the American Bank Note Company in New York City.  While working full-time, he attended night school at NYU and was awarded a Master of Business Administration degree in 1953.  Later, at NYU Graduate School in the night program, he was awarded two Advanced Professional Certificates, one in Federal Taxation, and the other in Corporate Financial Management.  In 1977, he was appointed Corporate Treasurer of the American Bank Note Company and served in that position until his retirement in 1989.     Ernie was a member of the American Society of Certified Public Accountants, the New Jersey Society of Certified Public Accountants, and the Institute of Management Accountants.  Ernie was also a lifelong member of the Basking Ridge Volunteer Fire Company #1 and served for 63 years.  In 2004, he was Parade Grand Marshall at the 100th Anniversary Celebration of the Fire Company.  He was also a member of the Congdon Overlook Masonic Lodge in Bernardsville, NJ for 38 1/2 years and served as Master of the Lodge in 1988.  He was a lifelong member of the Bishop Janes United Methodist Church in Basking Ridge,NJ, as well as a life member of the Veterans of Foreign Wars, #7858 in Bernardsville, NJ.  After World War II, Ernie joined the Veterans of the U.S. Navy Armed Guard and attended a number of conventions across the United States.  He was a history buff of World War II, and he and his wife attended the 50th anniversary of D-day in Normandy,France in 1994.  Ernie loved to travel and counts visits to Alaska, British Colombia, Hawaii, Europe, Korea, China,the Caribbean Islands, the Panama Canal, and every state as some of his travel highlights.  He also enjoyed vacations at the beach.  He loved Lawrence Welk, big band music, and ice cream. Ernie was active in scouting and went on a backpacking adventure with his son to Philmont Scout Ranch in New Mexico in 1973. With his daughters, he participated in a number of “Back Packs with Dad.”  Hes pent many hours supporting the outside interests of his children, including competitive swimming.    He was the primary caregiver for his wife, Irene, for 17 years following her near-fatal motor vehicle accident in 1997. Later, she developed Parkinson’s disease and Alzheimer’s, and he lovingly cared for her until her death on March 6, 2014.  He was a superb father and husband, an excellent provider, and a man of integrity.  His work ethic, devotion to family, sense of honor, and humor live on in all those who knew him.  Survivors include his daughters, Dr. Karen A. Hicks of Silver Spring, MD, and Mary C.Castiglia of Pattersonville, NY, his son-in-law, Walter F. Castiglia, and grandson, Cody F. Castiglia of Warnerville, NY. Ernie was predeceased by his beloved wife of 63 ½ years, Irene Hicks, on March 6, 2014 and by his devoted son, Ernest E. Hicks, on May 2, 2017.  He was also predeceased byhis loving sisters, Muriel Ketch and Phyllis Delgado of Basking Ridge, in 2014.  The Hicks family extends its deepest gratitude to all of Ernie’s caregivers,including Dr. Seema Bery, Heather Lines-Degelman, NP, Sheila McMenamin, NP,Lileith Graham, LPN, Roselyn Rosel, RN, Marjie Montes, LPN, and Nadia Tammany of Fellowship Village, Dr. Charles Shioleno of Atlantic Cardiology, and MarieJeudi of Helping Hands.  Friends and family are invited to gather from 10 to 11:30 a.m. on Saturday, February 15,2020 at the Gallaway and Crane Funeral Home, 101 S. Finley Ave., Basking Ridge,  at 11 a.m., the Basking Ridge Fire Company will honor Ernie for his service. A Mass of the Resurrection will be offered on Saturday, February 15,2020 at 12 noon at the Bishop Janes United Methodist Church, 22 S Finley Avenue in Basking Ridge, followed by interment with military honors at Somerset Hills Memorial Park, 95 Mount Airy Road in Basking Ridge. For further information, or to leave an online condolence message please visit www.gcfuneralhome.com   In lieu of flowers, contributions may be made to the Basking Ridge Fire Company No. 1 and Rescue Squad (30 Washington Avenue, Basking Ridge, NJ 07920) and the Bishop Janes United Methodist Church (22 S Finley Ave., Basking Ridge, NJ07920).